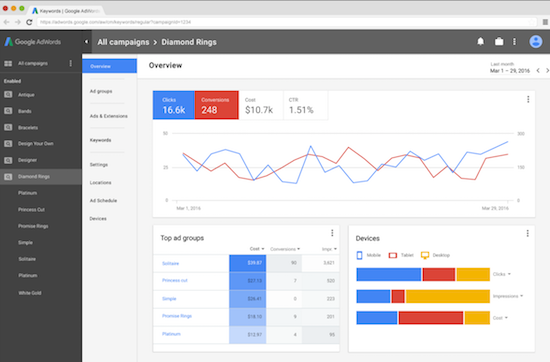 The Google AdWords interface is over 15 years old. There have been very few major updates.  Combine this with the many features and this has made an interface that is clunky and awkward to use for the novice. But Google has announced that they have already started a major redesign of the entire AdWords interface. This will be the first change of any kind since 2008.

What is Google Changing About AdWords?

Google has remained quiet about the exact nature of the changes. What they did confirm was that the changes have come as a direct result of feedback from advertisers. The biggest shift noted thus far is the move towards a more smartphone-friendly interface, however. Google is not just going to redo AdWords - they’re going to reimagine it.

Google specified three main themes addressed in the new update. The first is that AdWords will focus more on the needs of advertisers themselves. The second is more simplicity. The sheer number of features has grown to such an extent that Google needs to condense them to make the platform easier to use. Finally, AdWords is going to do away with its outdated design.

The redesign will be performed using the Google Design Language Material Design.

What Can Be Gathered About AdWords Thus Far?

Google made it clear that the actual functionality of the interface isn’t changing at all. Campaigns will be planned and launched in the same way as they always have. Marketers will not have to learn a completely new system for running ads on Google.

The Importance of One Screenshot

As of this writing, Google has only released a single screenshot. They show what the new AdWords interface should look like. The campaigns and ad groups will still feature on the left, but when clicked on Google will supply an overview that doesn’t take up the whole page.

These overviews will provide a more focused snapshot of each campaign and ad group. Users will get a snapshot of four important metrics at the same time, including clicks and conversions.

On the right, the Keywords view has also been simplified. There are three simple options for your keywords, negative keywords, and full search queries. This is a welcome change as the Keyword view in the current incarnation of AdWords is incredibly complex.

When is it Coming?

There’s no real timeline for when Google will implement these changes. The product is already in production and Google intends on making this a long-term process taking place over 12 to 18 months. Google wants to roll out the redesign by the end of next year, but there’s scope for extending this deadline into 2018, and even beyond.

Google is only inviting preferred advertisers to participate in the new beta testing phase. Their target audience is small to medium sized businesses.

Google AdWords is going to be undergoing some massive changes, and early signs are promising. If all goes according to plan it will be easier than ever to use and the learning curve will be far gentler for newcomers.

View all posts by: admin